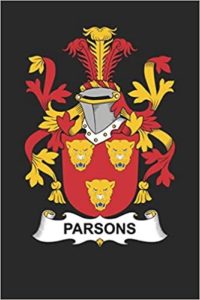 The spoken word and family stories, photographs, birthday cards and love-letters, the Records of Births, Deaths and Marriages, the National Census’, family heirlooms, hand-me-downs, parish records and genetics, all play their part in drawing our family trees.

On my Mother’s (Hilary Frances Chard) side, it’s easy, all the men for nearly three-hundred years, served in the Royal Navy, which makes an easy link between me and my love of the sea and sailing. Family visits to my maternal Grandfather always meant a trip to Sidmouth Sailing club. Grandad had contracted TB and been invalided out of the Royal Navy, subsequently developing it in his hip, which in those days meant a bone graft from his shin, resulting in a fused hip. He was awarded a shilling a week pension from the Navy. He always sent it back to them, saying their need was greater than his.

Notably, he was also the last Chard to serve with the Royal Navy.

On my father’s side, the Parson family started an association with the funeral trade in the 1800 s which continues to this day.

We know from local records that James Parsons and Sarah Honking Kingdom were married in 1799 in Stoke Climsland Parish Church in Cornwall and had five children. Richard Walter (b 1810), Thomas Henry (b 1812), Robert (b 1815), Elizabeth (b 1818) and John Honking (b 1821), however there is no trace of the family in the 1841 Census, so tracking some of them for the next 40 years is difficult.

We know that James was a farm labourer in Cornwall and that his youngest son John Honking Parson, moved to Middlesex sometime in the late 1830 s.

We pick up John Honkin Parson’s brother, Richard Walter again in the 1851 Census, he is a 42 year old Master Carpenter living with his wife Jane (nee Hawton), and their 15 year-old son Richard (who is noted as Apprentice carpenter) and their 10 year-old daughter Elizabeth (or Eliza), all together in 15 Guildford Terrace, Plymouth, Devon.

By the time of the 1861 Census, John Walter has moved to Plymouth from Middlesex, to live with his Uncle Richard. Sadly, both Richard’s wife Jane and their son Richard have died. Richard Walter is now married to Elizabeth Stenteford and together, they live with Richard’s daughter Eliza and nephew John, in Brunswick Place, Cattedown, Plymouth. Richard’s work as a Master Carpenter had strong historic connections to the Funeral Undertaking world of the time.

For context, the Burial Guilds, which were common throughout the country earlier in the century, were still in use, but their popularity was waning and the better economic conditions meant that the more affluent could afford to have their own coffin, rather than the use of the Parish one. It would seem that any carpenter could put a notice in their window declaring themselves coffin suppliers, for the possible profit from the production of even one or two coffins a year.

According to Julian Litten (funeral historian), “the average Undertaker [at this time] was little more than a speculative cabinet-maker and joiner…” .

It was ten years later, in the 1871 Census, when John Walter Parson, Richard’s nephew, is recorded as having taken-over his Uncle’s business, but no longer declares the business/himself as a Master Carpenter, but rather the slightly less prestigious, but likely more marketable, Cabinet Maker and Builder.

By the time of the 1881 Census, it is official, John is 46 years old and married to Emma Jane Charlotte (nee Ley), with four children, Alice Elizabeth (b 1869) Emily Louise (b 1871), Ada Ellen (b 1873) and Walter Oscar (b 1875). John’s business, is now officially registered as Carpenter and Undertaker and whilst John’s Uncle Richard may well have made the odd coffin in his work as a Master Carpenter, John was the first to declare himself an Undertaker in my family history and it was in the 1881 Census.

Following service in the R.A.F. John’s son, Walter Oscar, the second generation, joined his father and took over the daily running of the business sometime in the 1920’s, before John’s death in 1923.

Walter Oscar, known as Oscar, married Ernestine Lethbridge in 1898 and the couple had a son, Gerald Oscar (b1899)

In the 1911 Census, mother and son, Ernestine and Gerald, had moved across Plymouth to Millbridge. Sadly their son Gerald passed away in 1918 at the age of 18 years. (It is possible that Gerald’s death could be connected with the worldwide flu epidemic of the time).

Although still married to Ernestine, Oscar went on to have three more children with Bessie Callard; Oscar Leonard (b 1908), Dorothy Alice (b 1910) and Walter Cyril (b 1912).

Notably, in the third generation, it was Walter, and not Oscar Leonard who took over the business from his father in 1933. There is talk that as neither son had the asking price of £100.00, Walter borrowed £35.00 and put it down as a deposit, thereby trumping his brother, paying the balance of £65.00 off at a later date.

During WW2, with Walter serving in the RAF in Canada, father and son, Walter Oscar and Oscar Leonard stepped up to help Beryl and all three continued in the business until (Walter) Oscar’s death in 1944 at which point Oscar Leonard continued to run the workshop and cover night-time duties with Beryl directing the funerals in the day. Oscar left sometime after Walter’s return from war service, due in part to dermatitis caused by the wood sap and polishes used in coffin construction at that time.

Beryl and Walter brought up their son Walter Cyril (Wally), the fourth generation, in the ways of the business and with Wally’s assistance, ran the business for nearly forty years before their deaths in 1987 just three months apart.

Under Wally’s stewardship, the business grew from the two offices to seven and continued to be successful, as it had under his father. Wally held various positions in the National Association of Funeral Directors, including being an Examiner on the National Examinations Board and Press Liaison Officer, once being voted ‘The Professional’s Professional’ by his peers.

Coincidence would have it that I, the fifth generation, like my forefathers before me, was born at home, from where we ran the business. I was born in a Funeral Home.

I joined my father in the business in 1988 and worked with him and his team, for the business, for over twenty-years as a proud team member and Company Director.

Time doesn’t stand still and some would say that when Wally retired from Walter C. Parson ltd. in 1999, that it was the end of the Parson family connection to the business bearing our name. The connection did finally end when I resigned in 2010, I was the fifth and last generation of the Parson family to be involved, which did put the final nail in the coffin, so as to speak.

The family story doesn’t end there though, and today, having been born in a funeral home and been trained firstly by my father, but latterly by a whole range of experts in a whole range of fields, over a thirty year period, I am approaching a lifetime of service in the same profession as my forefathers and that’s a bit of history in itself. 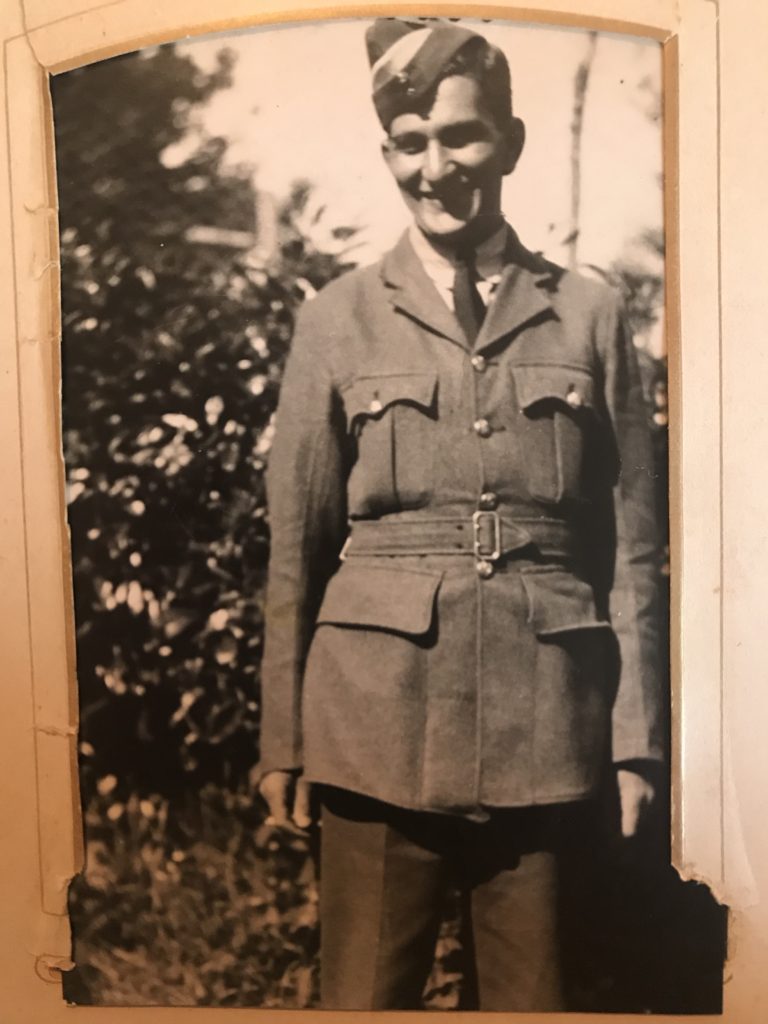 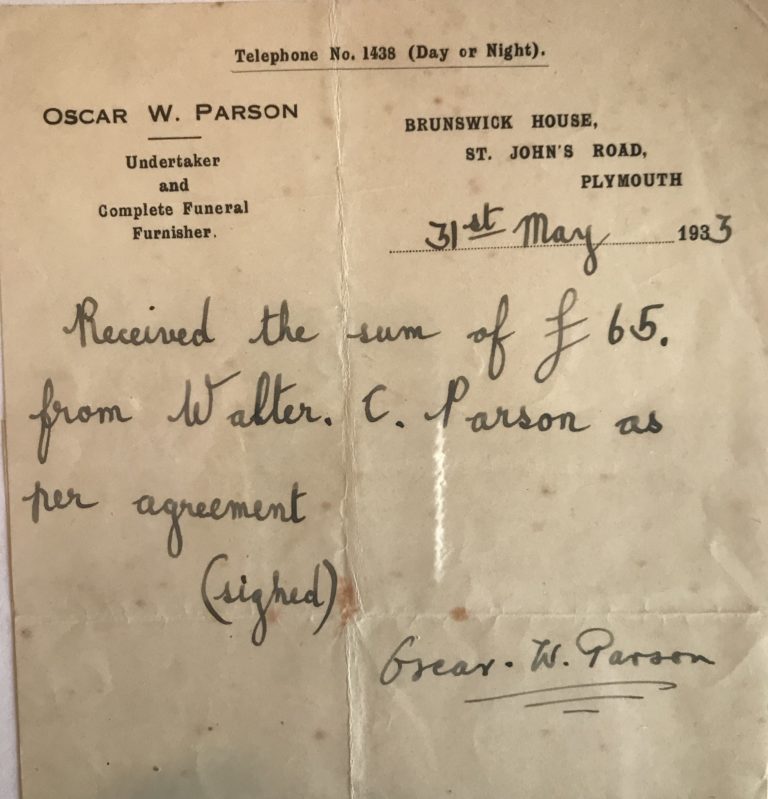 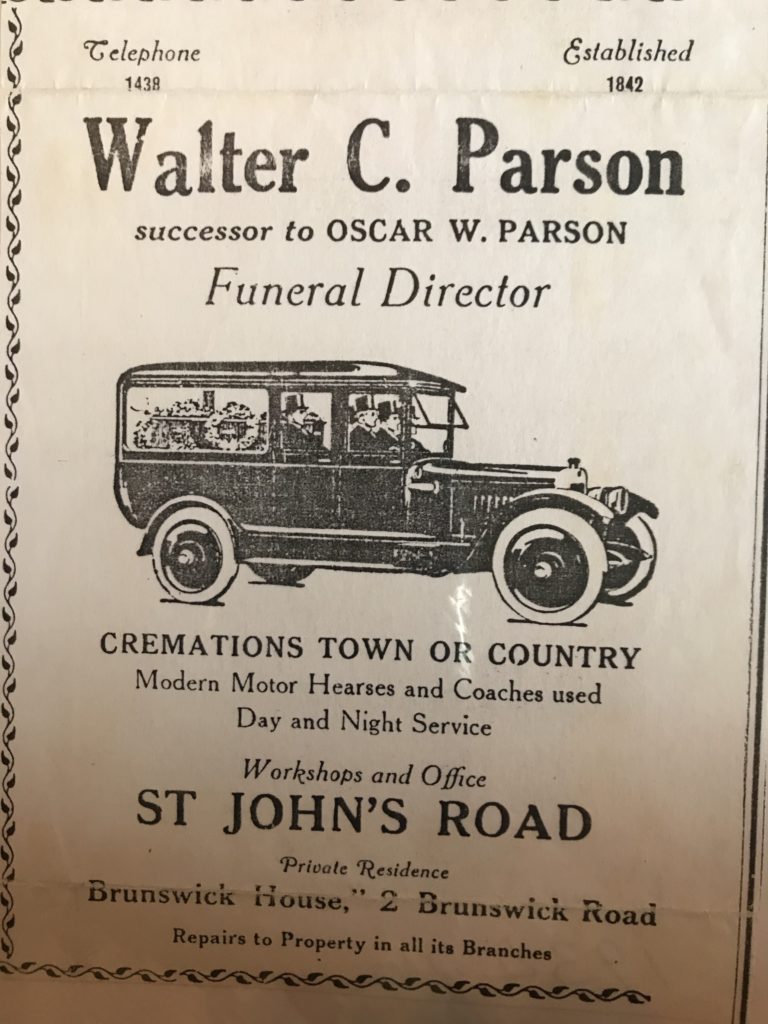 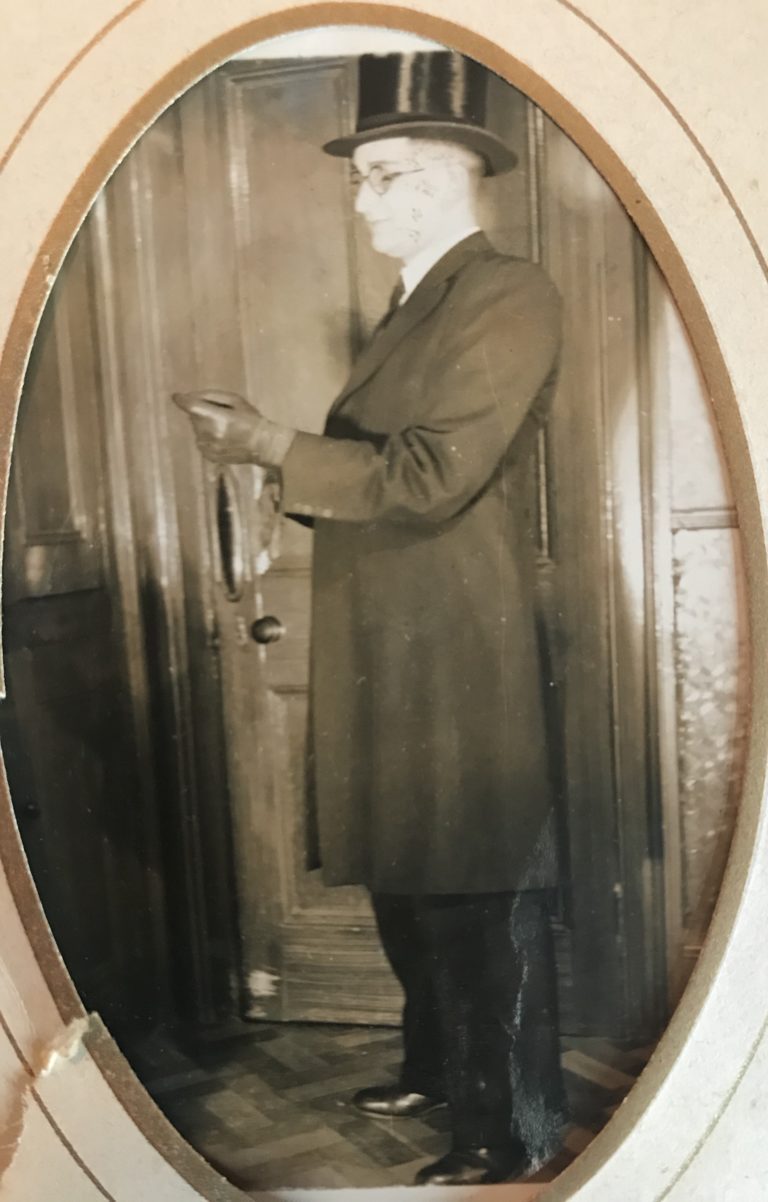 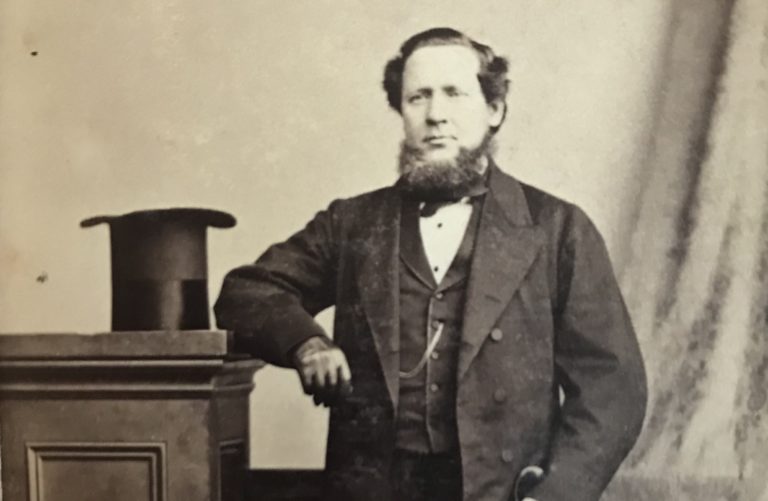 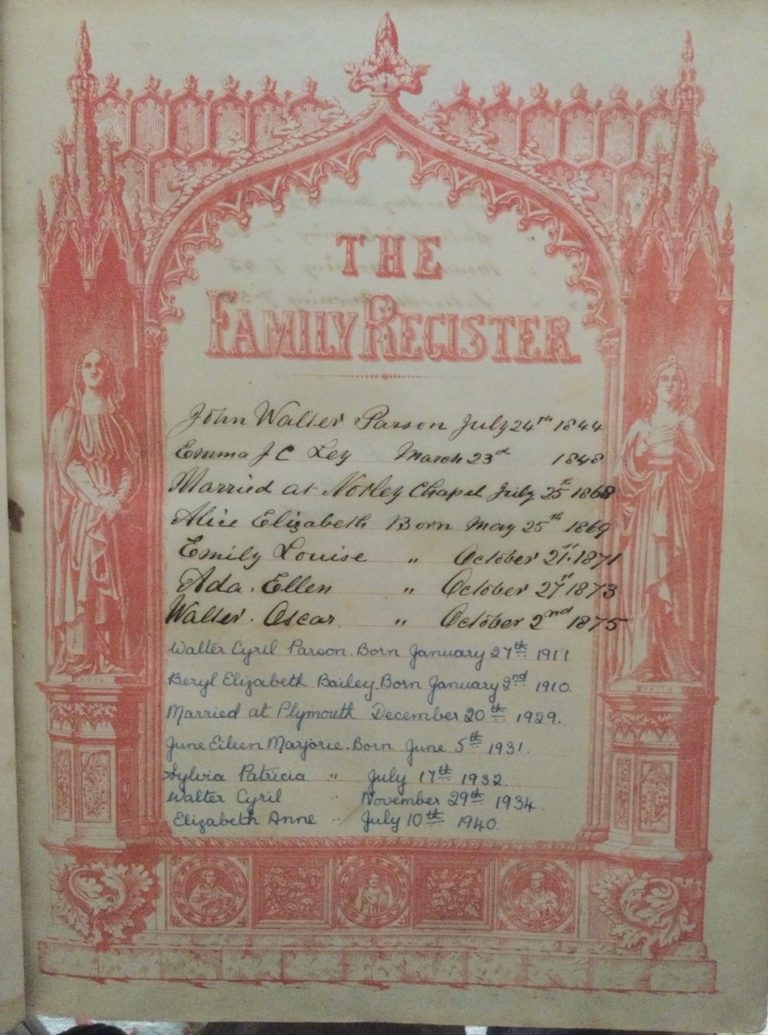 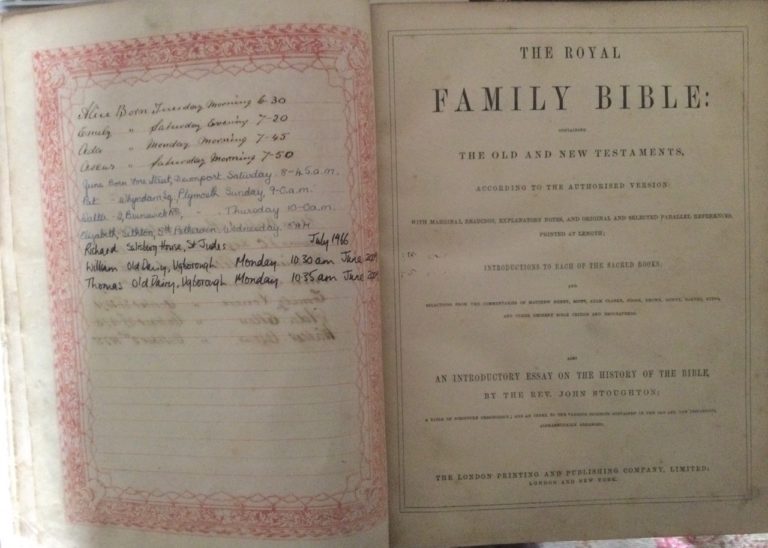 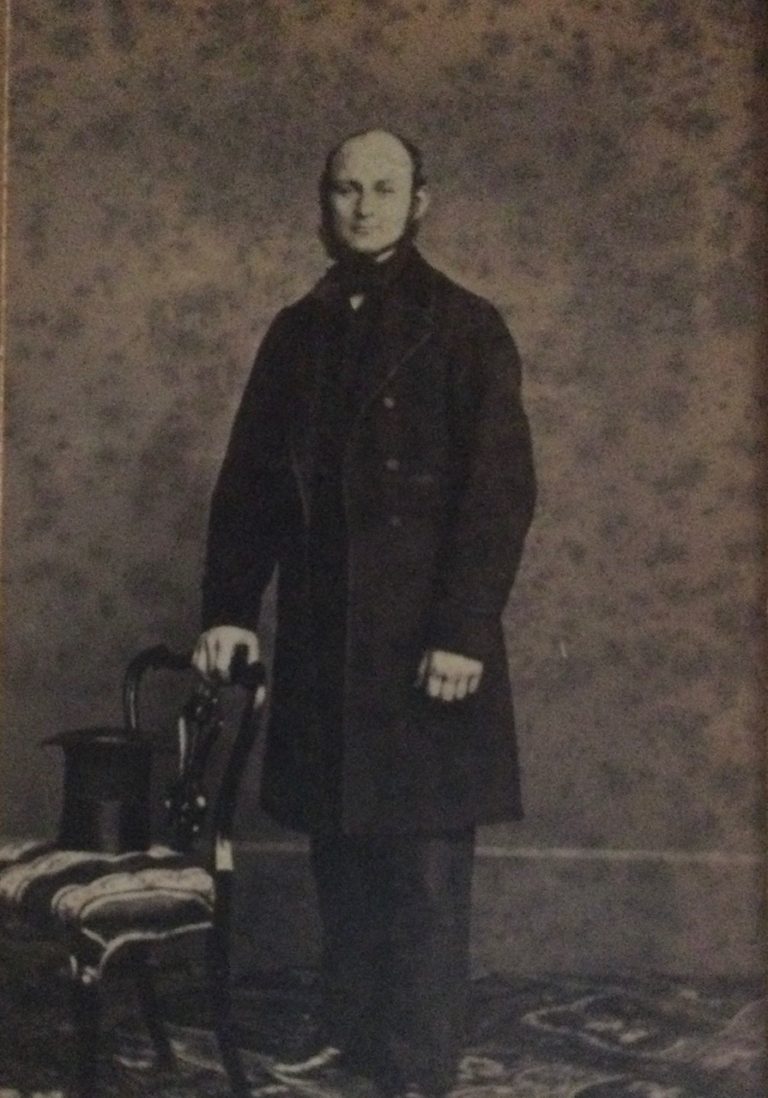 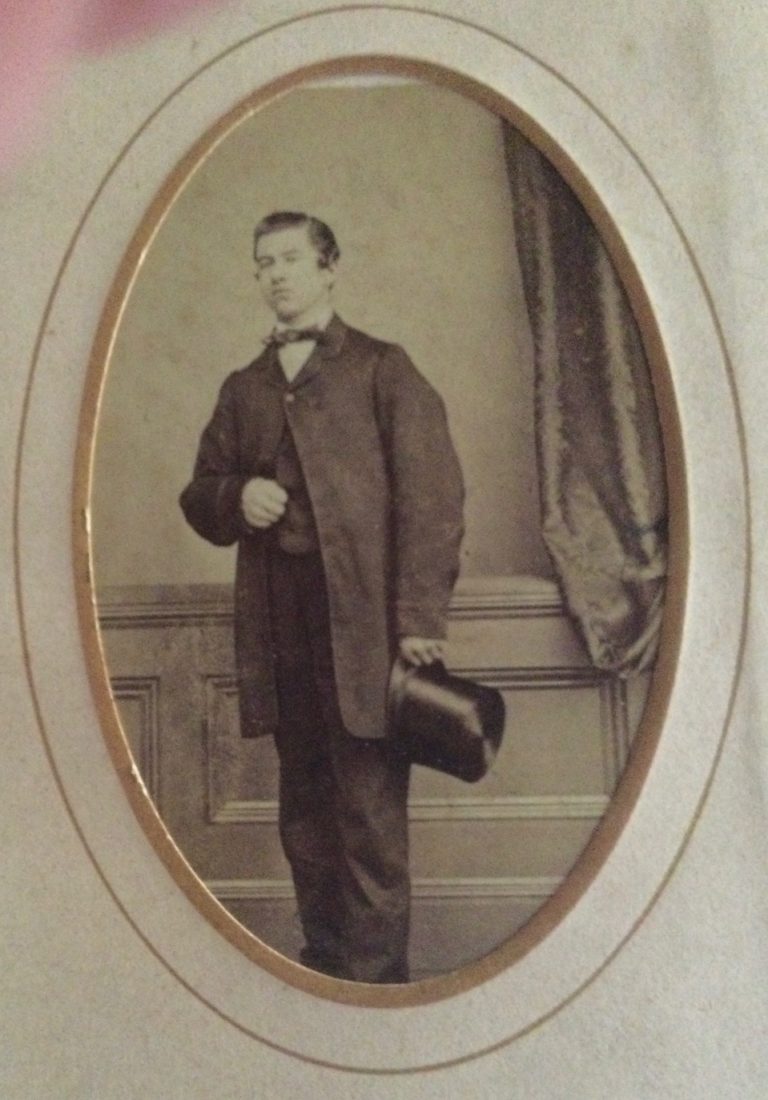 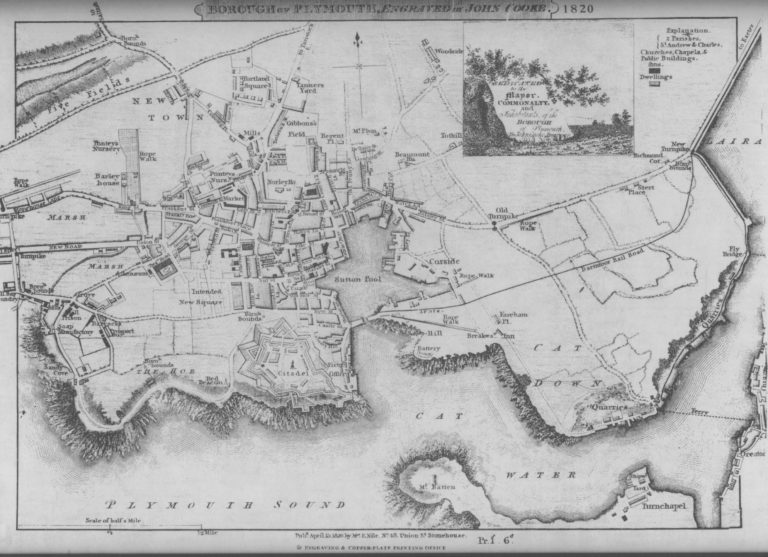 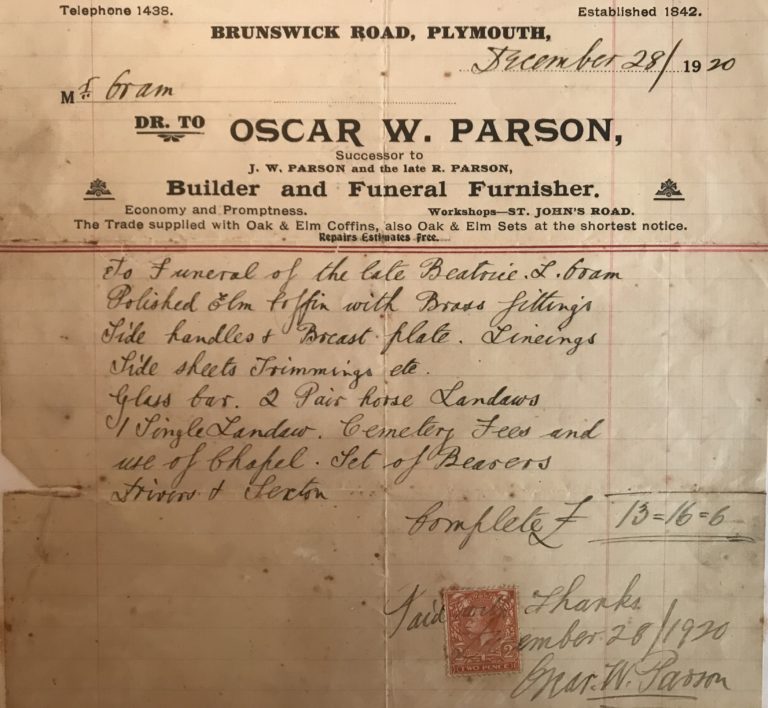 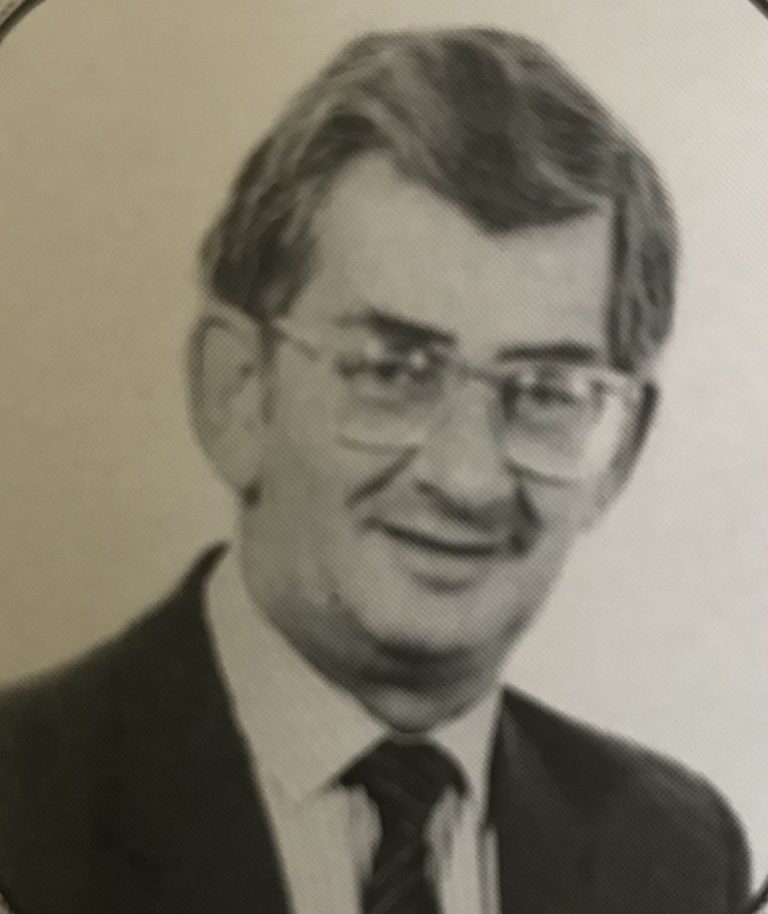 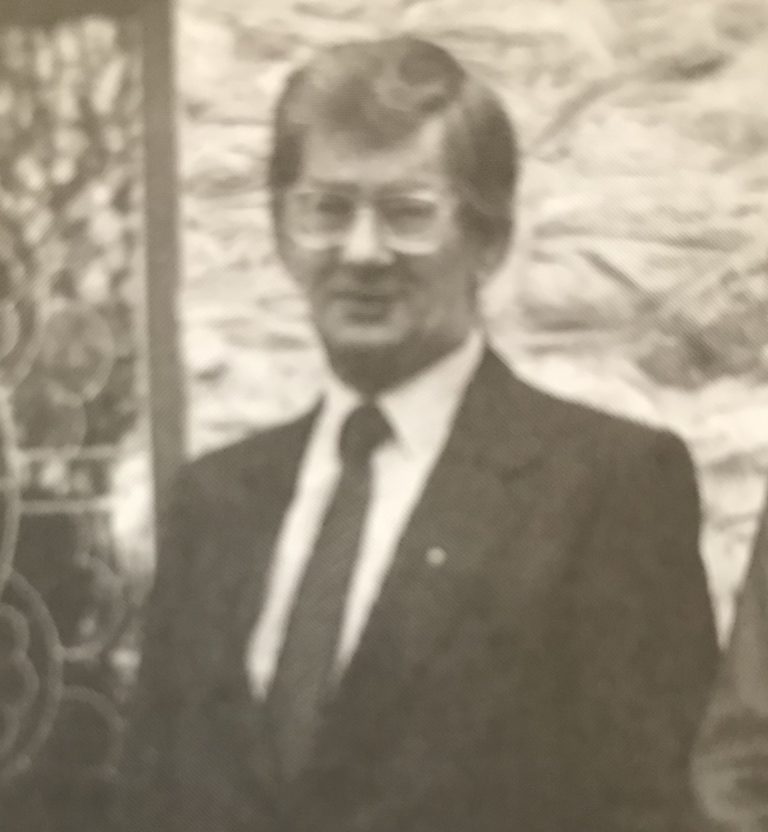 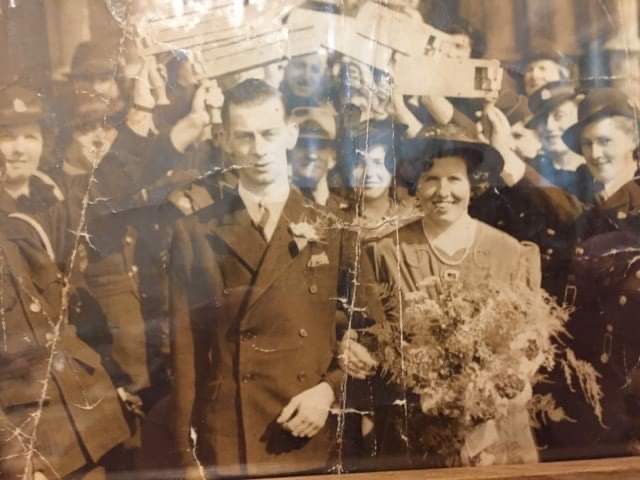 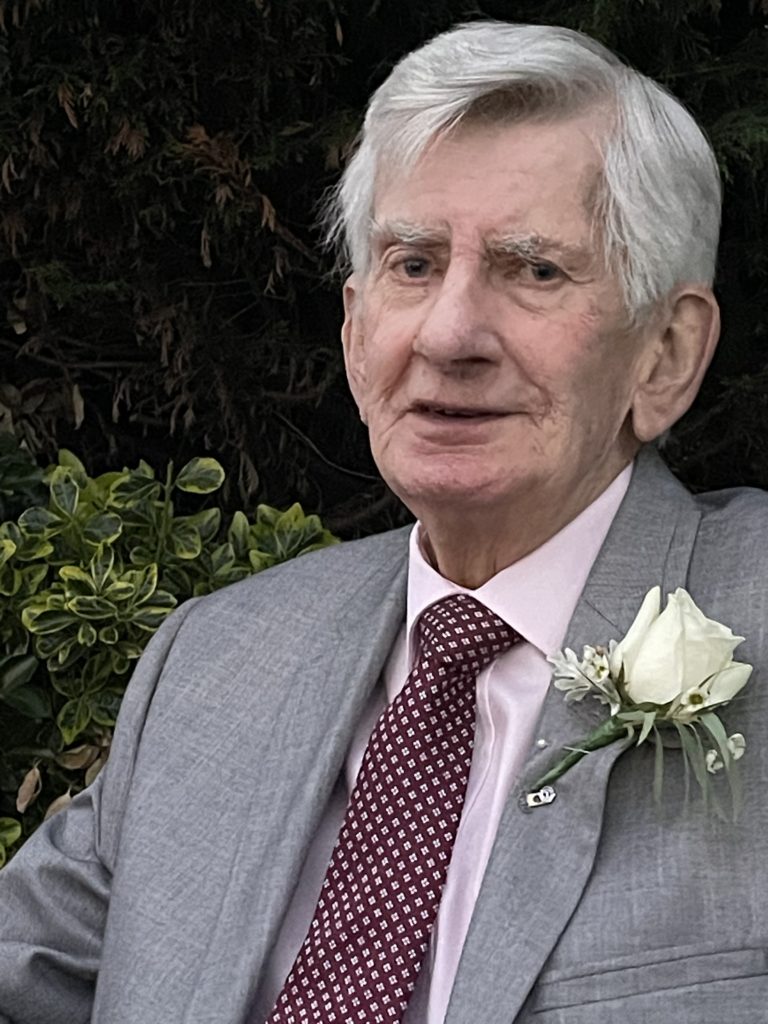 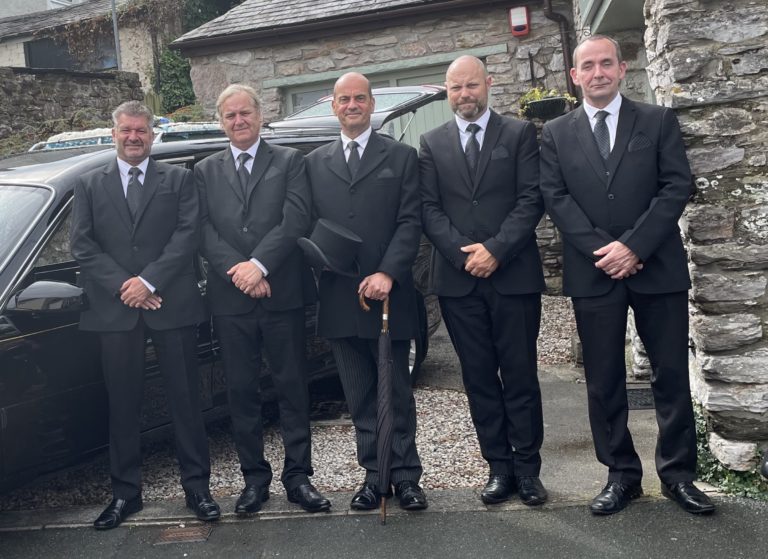 What our
customers say...

Richard and his team are consummate professionals who supported us at the most challenging of times.

When Mum passed, you were an absolute Godsend to me. You helped more than I could have expected

Nothing was too much trouble.

Richard was recommended by a friend. I immediately felt comfortable and relaxed. He was a good listener, easy to talk to and his manner was reassuring and helpful. I can't thank him enough for seeing us smoothly through this traumatic time.

I lost my husband in his early 50's and Richard took over with great empathy, kindness and discretion. The professionalism of both him and his team was exemplary, even down to organising the traffic so that my husband's biker friends could follow us to the funeral. From the bottom of my heart, I thank you.

Nothing was too much trouble. Everything from start to finish was absolutely perfect, the attention to details also superb including the timing of the drivers closing on both car doors, in my eyes, with that attention to detail I knew my Dad was in safe hands

I cannot recommend Richard enough for his compassion, professionalism and kind and thoughtful approach when dealing with myself and my family at such a difficult time. Nothing was too much bother for Richard.

From start to finish the professional service that we received was excellent. We would recommend this company to anyone who sadly is in need of this service.

Throughout the undertakers were superb, calm, stewarding agents of remarkable humanity... It was an incredible experience - a good disturbance of the heart.

Richard took over and gave our father's funeral dignity. An excellent all round service that I have no hesitation in recommending.

.. they looked after my mum, and all the details with the highest standard and went above and beyond.

...unbelievable from start to finish. It is rare to find such a truly personal service

From the moment we contacted Richard we knew our loved one, and the family, were in the safest hands. Outstanding care, service and value for money